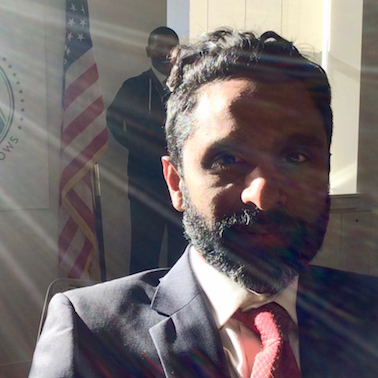 Once upon a time there was a little boy who played the trumpet. The trumpet was too quiet. He found a guitar and played it and it was loud enough. He played on a stage. He felt great playing on a stage and thought often about how the people on the stage, around the stage, behind the stage made something together. He experimented with other stage activities: acting, directing, designing the sound, writing and playing music for plays. In college he analyzed data to inform Paul Epstien’s introduction of heatlh consequences into the global warming conversation of the late nineties. As a young adult, he provided strategy and software to city and state governments that helped them fund the services they provide residents, including a succesful five year plan to move DC from the red to the black. In the early Internet he saw a new stage and felt incredible enthusiasm for what people could make of it. Over fourteen years, he co-founded three digital entertainment companies. These companies pioneered the ecosystem that empowers creatives to prosper independently (see GarageBand). Now as an adult he organizes creatives for social justice and civic impact including a community that hosted a 2014 Presidential town hall on the millennial economy. As a Presidential Innovation Fellow, Mr. Koppula will assist federal agencies in every way he can with upgrades and pilot improvements to what they provide and how they provide it. He will advocate for anyone harnessing innovation for the public good and accelerate the pursuit of openness, inclusion, adaptation and productivity in their work.